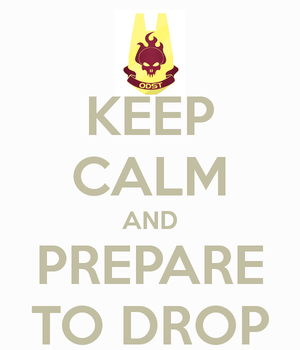 "Start a new game, drop into the nighttime city."
Information

Prepare to Drop is the opening level in Halo 3: ODST. See Halopedia for general information.

When the level starts as you're sitting in the drop pod, hold the B button. Then hold the action button (the same button you use to reload) so that you exit the drop pod the second the drop pod door blows off. You will fall down to the streets, go immediately to the right. While falling, mash the crouch button, but don't mash for so long, because if you're mashing while you hit the ground you will lose a lot of health.

Throw 2 frag grenades at the brutes the second you see the first brute start walking away. Pistol any remaining grunts. If you're on OG, the enemies won't move immediately and it makes killing them with the two grenades much more consistently. On MCC, it's really hard.

Turn around and pistol/nade/SMG the grunts. Burst firing the SMG is arguably the most effective way to kill the grunts because the SMG has a larger magazine than the pistol, it does high damage to grunts without requiring headshots, and the burst firing eliminates a significant amount of recoil. If the grunts drop plasma grenades, use them or assassination to deal with the two brutes. They can do a lot of different dumb things here, like drop bubble shields or simply run away. It takes good luck to get a really good/really fast clear.

Once you've killed everything, go to the right of the 2nd fight area and walk towards the third telephone from the left. During this time, two messages will pop up. Both of these messages can be skipped quickly by rapidly tapping the A button. After the second message goes away and you are standing in front of the third telephone from the left, it will ring. Hold the action button before it rings to answer it as fast as possible. Keep progressing past the phone booths and go to the closest door, and hold the action button to open it. If you lost a lot of health, you can get a health pack by jumping on top of the telephone and jumping to the platform above it. This will allow you to pick up health pack at a station and not have to worry about not being able to open the door immediately.

Progress through the buildings, go through the grunt courtyard, and climb the next building until you've completed the level. Use slide jumps and grenade boosts where you can.