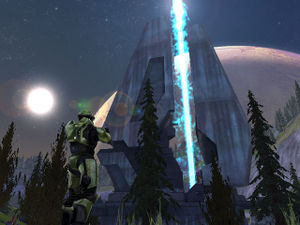 "Seek out surviving Marines and help them fight the Covenant."
Information

The Pillar of Autumn - Halo (Halo CE) - The Truth and Reconciliation

Rock Grenade Jump by ericlol.
As the level starts run towards the river and use the big rock to jump on a rock ledge, then grenade jump to the cliff above. This saves about 5 seconds, skips the first enemy spawn up ahead, as well as the Banshees.

On Easy you may want to run across the bridge instead, especially if you are inconsistent with grenade jumps or just starting out. The grenade jump is much more important on Legendary due to the skipped enemy spawns.

On both difficulties it is important to note that the next dropship will spawn when there are only 2 enemies from the previous ship, so as long as you get the next dropship before the enemies are dropped, the last 2 enemy kills do not matter. Also if you stand too close to the ships before they start landing they will not drop.

Once you reach the base, assist the marines with killing the first drop ship spawn. Once the enemies are dead, pick up plasma grenades and kill all 5 of the marines, including the 2 on top of the structure(Killing the marines skips dialogue. Also if you kill the marines and clear the first 3 ships extremely quickly, the 4th ship will not spawn, going straight from the 3rd ship to the 5th, saving ~20 seconds.), then pick up the health and frags up there and proceed to the next drop ship on the other side of the base, shoot the elite on the right with a plasma pistol, then throw a frag to the other side killing the grunts. For the second ship, once it starts coming down, throw a plasma to the right and a frag to the left, and start backwalking toward the beginning of the area for the 3rd ship, cleaning up any remaining enemies with your pistol. For the 3rd ship, try to headshot grunts before the ship lands, then throw a plasma on the left for the elite and grunts and a frag to the right if you didn't kill 2 or more grunts in air, then use the pistol to clean up. If you have to do the fourth ship, don't use frags, use your weapons and plasmas. For the 5th ship, shoot the grunts on the left and overcharge melee the jackals. You should probably save frags for the 3rd dropship to kill the elite, and the 5th dropship for the ease of killing the spawn. Once you have killed all dropship spawns grab the warthog and shoot the marine out of the turret and then continue along the intended route.

Kill the grunts to the left once you round the corner, then run and pick up a plasma pistol, then noob combo the elites on the right. Once the enemies are dead, pick up any plasma grenades then kill only Johnson. Go on top of the structure to get to the 2nd ship ASAP, then stick the elites in the right side of the ship and throw a frag grenade to the other side. For the second ship, once it starts coming down, throw a plasma to the right and a frag to the left, and start backwalking toward the beginning of the area for the 3rd ship, cleaning up any remaining enemies with your pistol. For the 3rd ship, try to headshot grunts before the ship lands, then throw a plasma on the left for the elite and grunts and a frag to the right if you didn't kill 2 or more grunts in air, then use the pistol to clean up. For the 4th ship, use the last frag on the grunts and your weapons and plasmas on elites. For the 5th ship, shoot the grunts on the left and overcharge headshot the jackals.(I don't remember if there is a elite. but if there stick him or noob combo him) Before getting into the warthog it is recommended to grab a needler, and don't shoot the marine yet.

At the bridge segment, use the warthog to jump or fling to get on the slanted wall heading up to the console, this will skip a cutscene and instantly start the bridge. Proceed out of the natural caves and stop by the escape pod on your way to the left most spawn to pick up a sniper rifle for later. If you did the fling, or jumped on the warthog, too far right, you may trigger the cutscene, so shoot as you hit the button to be safe if you feel like you were too far right.

When you go to activate the light bridge throw 2 plasmas down the intended hallway behind you and fire the needler to kill the two elites that are added on legendary. Also when you get back on to the slanted wall to shoot the marine in the turrent.

Through the next areas, you will be killing marines. Be careful about causing the marines to go red - if this happens the level will complete much more slowly than normally, and be nearly impossible on legendary. Kill the marines with grenades only. Exceptions include the last two marines in either area.

Once you reach the first marine spawn, go inside and kill the marines, with frag grenades proceed towards the next spawn located at the cliffs. You can also throw one plasma in the center, and a frag toward the area they dive.

Before heading into the rocks, pick off the sniper located above the marines. Finish off the remaining marine spawn and head towards the last group.

Instead of killing all the marines, drive around the right side in the warthog and reach the top where the marines are holding off. Kill all but the sniper and one other, and allow them to get into the warthog, you will use them at the next base as an efficient way to kill the enemy spawns. Also while you're up there the marines on bottom will more than likely die, if they don't, shoot near them to lure the enemies.

Before entering their area, pause on the hill for the prompt to search for remaining life boats to save time. Drive up to the marines to trigger the area, then proceed to kill the enemy spawn and the dropship that comes afterwards. If you missed a marine, the level won't finish and you'll have to restart, or deal with a whole other area of enemies.