Difference between revisions of "Two Betrayals" 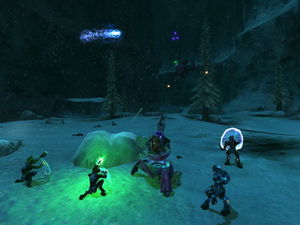 "Re-activate the weapon at the heart of Halo... and learn the truth."
Information

There are 4 Sentinels that immediately engage you after you skip the cutscene. You can ignore them on Easy.

Generally best to hang back and let the Sentinels and Covies fight each other. Keep in mind if most of the Grunts die, there will be an Elite and two Jackal reinforcements spawning in the back of the room. Kill some of the Sentinels and prioritize the very first Elite to prevent this.

Get to the bottom of the ziggurat as quickly as you can and take Banshee.

There are two methods available here. One method involves a deload trick, and the other is the normal way to play the level.

Information on the deload trick (which is far easier by comparison and actually faster) can be found here: https://www.youtube.com/watch?v=da8IEfjr5KU

The other method spawns all the enemies like normally happens. Two Elites typically spawn to the right after opening the door, throw a plasma at their location without being detected. Throw a frag to clear the rest of the outside enemies. Try to kill them as soon as possible.

Head to the right side of the ziggurat, toss a plasma at the patrolling Elite, toss a couple more plasmas at the 2 Elites below. Drop down onto the snow and hug the wall to the right. Get close to the Wraith without being detected and shotgun it. The Wraith can still hit you in close range so stay very close to it. Take the Banshee afterward.

Nade jump up to the ledge.

Break glass window to the left, alert enemies and toss plasma to draw them away, frag jump up to ledge, rocket Grunts below, frag/rocket Jackals. Toss a plasma or two across the hall to kill the 2 Elites.

Hide and wait for Flood to engage Covies, throw frag through the gap in the wall to draw out Elites and kill Grunts, fire rockets.

Plasma nade the AR Flood, frag the shotgun Flood, toss a plasma where the 2 Elites spawn but don't trigger them until the nade is about to explode. Wait for a bit so the other Flood in the room to retreat then make your way to the next hall. Frag the Flood there and try to get a CP before engaging the lone rocket Flood. Just run through the next room, use an explosive behind you to kill the Infection form spawns and pursuing Flood. If you don't get the CP, simply backtrack and hit the lz again and you might get it.

Fire rocket to flip Ghost upright, drive to Banshee. On your way there, get the health pack and ammo if needed, at the bottom of the spiral path area near the overturned Hog. Take the Banshee to the second pulse generator.