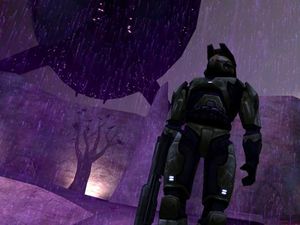 This trick comes in multiple parts, including the wraith teleport, upwarp, and platforming. This trick skips the entire belly fight section. Here is Garish's tutorial on how to do it.

To get inside the wraith, you have to crouch next to the right wing of the wraith as it blows up. To set this up, on Easy, throw two grenades (two frags or a plasma then a frag), and shoot 6 plasma pistol shots. On Legendary, throw six grenades, or 5 grenades and use a plasma pistol to lower the wraith's health.

Once the wraith blows up, you should be inside the wing, then aim slightly to the right and move left. If done correctly, you will be inside the wraith in a corner. From here, look at the corner geometry in the ground, and lightly tap right for a one-tick input, then look straight down. You should be looking at the tip of one of the patterns on the ground. If done quickly enough, you can get a checkpoint here before the upwarp.

Here is another version of the Wraith Teleport and upwarp by Gpro.

To get out of bounds on the top of the level, hold space and move backwards. If you do not fly upwards with a lot of speed, adjust your reticle's position very slightly to the left or right. Then, you can either land on the pillar to the right by looking towards it and immediately holding forward or forward and right, or on the very small ledge by moving slightly forwards and right.

On legendary, once you land, kill a marine so you only have to kill one in the prison section.

There are multiple ways to do this platforming section. At the start, walk down to the door which is next to the camo and health pack and land on the top of the wall. Then look towards the belly room which is the only visible part of the level. Jump backwards once and walk backwards and right until you reach a corner. Then look slightly to the left and hold jump and left until you reach a wall, turn slightly back to the right and jump to the left twice until you reach another corner. Then jump back and left very slightly.

On easy, you can skip the rest of the platforming by jumping back and right at this point and proceed through RNG room. Or you can continue doing the platforming past it.

From here, walk backwards while look slightly left until you reach a corner, then look at the left corner room and jump back once, walk back for a split second and jump backwards again. Then look to the right while still moving backwards until you reach another corner. At this point, you want to look at another corner on the right side of the room which forms an 'L' shape. Here you want to strafe jump right by moving right first then immediately jumping then once your reticle passes the bottom section of the L, hold left until you reach the last corner. The look at the center of the room at the center of a pillar and hold jump and backwards until you land back in the room.

After releasing the marines from the prison, head back to the room where you faced a gold elite and other enemies. Just before the long hallway right before the room, stop and kill two marines (not Keyes) and all the marines will turn hostile towards you. Quickly head to the room and kill the two or three (depending on difficulty) invisible sword elites. As soon as the last elite dies, the level will end, skipping roughly 20-30 seconds of dialogue (this is assuming the hangar bay skip was performed). Be sure to skip the end of level cutscene as early as possible, otherwise pressing A will just revert back to a point in the cutscene and you will need to manually watch the entire cutscene to progress to the next level.