Difference between revisions of "Sacred Icon"

The most pointless level
Information

Immediately upon spawning, turn right and grab the two Plasma Rifles from the container. Use these to shoot the Piston in the corner as you approach, so that you drop down without having to wait. Much of Sacred Icon is just long stretches of walking, with no enemies that need killing. Timesave is therefore mostly in taking the most optimal path to the next area that you can. Whenever you shoot a piston and fall down the curving slopes, you can go faster by landing on an edge at each turn and crouching, conserving momentum. On two occasions in identical rooms you can give yourself a boost using wall-mounted Sentinel spawners as shown, one of which is in the room after the first piston.

When you come across the large room with four 'Plug Locks' as pictured in the Level Image, you needn't kill the enforcer; It explodes along with all the other Sentinels if you simply shoot or activate all the plug locks followed by the panel that pops up on the front of the gondola. After a respite, the gondola reaches the other side with a similar room, with Flood and Forerunner enemies. The only one that needs to die is the Enforcer, so shoot it's 'arms' off with a Carbine when it comes into sight and then kill it with Plasma Grenades. Head out through the slatted door that opens when it dies.

Beyond this, there are no more enemies that need to die until you get outside. Simply move through the following rooms as quickly as you can, picking up a Battle Rifle on the floor in the large open room (if it spawns), and then the sword to the right in the final room before you get out.

Once outside, you can perform one of a few different swordflies across the pitfall directly ahead, spawns permitting. Otherwise, just walk across through the cylindrical walkway to the right. A bit further on lies the final area of the mission, in which you and Halfjaw hold out against waves of Flood. There are five Combat Forms initially in the area. Kill them and Halfjaw will move to a specific spot and say "Arbiter, what are you doing here?", at which point the waves will begin. Focus the Combat Forms; The Carrier Forms do not matter. When you hear/see the Phantom coming, it is best to kill anything remaining as sometimes the end of the level is delayed because the Phantom turrets are aggro'd to Flood.

Here are some diagrams than can help you predict the waves of Flood, showing you the positions they can spawn at, and with which weapons. 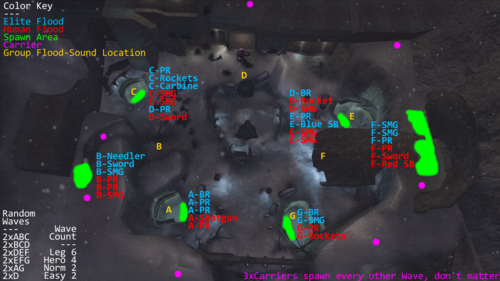 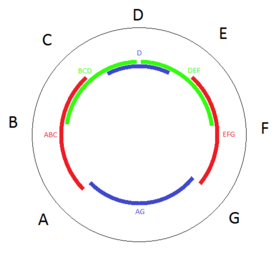 This level is largely the same on Legendary, with the one main difference being that the final fight has additional waves of Flood, with more Flood per wave. Care should be taken in the room with the first Enforcer, as it can kill you quite easily. Shoot the four Plugs and get down to the lower area of the gondola, using camo to come back up and activate the panel. The hallway in which you hear marines shouting 'Suppressive fire!" is quite nasty, as it has a large amount of Carrier forms to navigate around that will kill you if you try to simply run through. There's also a good chance of Shotgun-wielding Combat Forms here, which will ruin your day. You can jump across the pitfall on the right to avoid some of these, which is advised. This combined with good camo usage and frag grenades to scatter Carrier Forms should get you through.