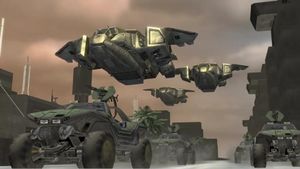 Follow the route in the world record video and head over the rooftops to Hotel Zanzibar. If you miss a jump, there's usually a slower backup route. Alternatively you can revert to last checkpoint if you miss a jump. Just make sure to keep track of where your checkpoints were received.

The strategy for this section on Legendary is no different than the Easy difficulty strategy.

Grab the pistol from just inside the window and hold it for the rest of the level. The pistol does not spawn anywhere on Metropolis, so you will get a brand new set of weapons when you start Metropolis. This is called preventing weapon carry-over. This is beneficial, as you will always spawn with four grenades, which are needed on Metropolis. Continue through the hallway, avoid the enemies at the end of the hallway and then continue forward up and over the wall straight ahead of you. Head towards the ghost near the crashed pelican that is on the beach.

When dropping back into bounds at Hotel Zanzibar, first grenade the turret that is setup to the left of one of the palm trees below you. If there is a grunt currently manning the turret, you'll want to shoot him off of the turret before the grenade blows up. Your goal with the grenade is to blow up the turret. This will stop the White Elite from pathing to try and man the turret. After you do this, run to the White Elite and get as close as possible. Your goal is to get him angry so that he goes into his rage animation. When he is halfway through his rage animation, melee him in the back so that he drops his sword. Pick it up, then go pick up the pistol that is inside the hotel. You need to pick up the pistol to prevent carry over to Metropolis, so that you have 4 grenades. Continue through the hallway.

At the end of the hallway, 2 elites and 3 grunts will run around the corner when you get close. Sword melee one of the elites and then sword cancel off of one of the grunts in the back of the group. This will allow you to travel faster and is one of the safest ways to quickly complete this section.

Continue to the ghost.

You will want to take a different path compared to Easy. Drive straight ahead, you'll see two palm trees grouped together. Drive slightly past them on the right. Quickly turn left, you should see a ghost boosting directly at you. Drive past the ghost and towards the turret. You need to drive past the turret quickly. After you're past the turret there will be more enemies. Drive past them quickly, round the corner, and then go straight out towards the ocean. Once you reach the shoreline, cut towards the left and continue normally. In the next section you can drive under the tower that has a sniper jackal in it, driving straight into the tunnel.

Drive to the end of the level. The Shadows near the end will often switch lanes and generally force you to juke them, losing time. To avoid that, start riding the ledge just before or after you reach them. Refer to the current world record video for tips on how to avoid enemies and other vehicles.

Travel forwards into the first tunnel to trigger a Warthog to spawn behind you, then switch your Ghost for the Warthog. If the marine driver is in a certain animation when he gets out, he'll get in the passenger seat right away. You must keep the turret marine alive until you reach the shadows. He is key to drawing their fire away from you. Taking both marines with you isn't required with good driving, however it can help. Refer to the current world record video for tips on how to avoid enemies and other vehicles.