Difference between revisions of "Metropolis" 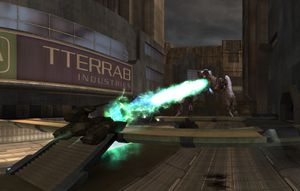 Take the Warthog, drive to the tunnels. On legendary, make sure you take both Marines for damage absorption. You may have to drive to the far left to avoid the Wraith gunner.

This level is easy until the tunnel section, which requires precise driving. Take the route shown. You shouldn't need to powerslide. Turn left and whip right to get onto the ledge.

If your Hog is badly damaged, you can wait for marines to bring in a second Hog and take that one instead. You can headshot the 2 Jackals at the first gate to minimize damage.

If you slow down after successfully exiting the tunnels, you can get a CP.

Getting shotgun+rocket from the Marines on the stairs makes it easy to clear the Scarab later.

You may want to park and snipe the Sniper Jackals, then sword-fly to the Wraiths. You can carry over a Sniper Rifle from Outskirts for this purpose.

You can yolo it and board-nade the Wraiths without killing the snipers, but you'll need 2 frags to do the early Scarab trick. Plasmas carried over from Outskirts can be used to substitute frags for the Wraith boarding, but you can also use them to stick the Scarab pilots later.

Grab a plasma rifle and get a BR for a ghetto noob combo to clear the Scarab. The Ghost drivers on the Phantom will drop plasma rifles on the ground when they die. Cpl. Perez also has a plasma rifle.

Getting on the Scarab early only saves about 10 seconds, so if you mess it up, just continue through the level as intended.

You need 2 frags for this trick. Refer to the video for the setup. Text instructions:

Jump onto the lightpost and then grenade-jump onto the tall metal post. (It's wobbly, so if you mess up, you'll probably knock it over.) Align yourself with the edge of the far wall. When Sgt. Banks pauses between "I don't think it's stopping" and "Keep your head down," throw a grenade, and run+jump forwards. You should bounce off the Scarab's "eye" and onto the roof.

NOTE: If you go through this level too quickly, you can deload the Scarab. Monopoli does it all the time. There's nothing you can do but reset.

Once you get on the Scarab, the enemies will spawn after a set time, but you must manually trigger the pilots to spawn. The trigger to spawn the Scarab pilots is at the bottom of the ramp. There will be 3 in total, one of which is white.

Wait at the bottom of the ramp for the enemies to spawn, then run forward and shotgun the pilots.

A relatively safe way to kill the Scarab pilots is to noob combo them through a wall. After boarding the Scarab early, wait below for the enemies to spawn. Quickly run back to the front of the Scarab, and drop down, just to the side of its "eye". If you push against the wall, you should be able to see the pilots and kill them through the wall. Sometimes an Elite may seek cover behind a wall, so you might have to flush him out with your remaining grenades.