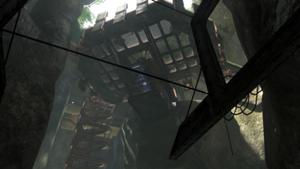 we can't. hold. out. for. ever
Information

The Hangar: When you make it there you want to slide jump down the stairs, because there's a really subtle trigger that spawns the 1st set of phantoms. There's a full BR in the basement of the hangar, if you happen to run out of ammo while dealing with the phantoms.

Drone Fight: If you have any sticky nades when you make it to the drone fight you can use them to kill the drones that pick up the marine, because they can sometimes not get killed by any marines. To kill the drones coming out of the pipe you just aim slighty under the pipe with the turret at the left side of the room.

After you kill all the drones you want to get a plasma pistol(or have acquired one beforehand) so you can weaken the brute chieftain in the next section, and after doing so you can just br him to death for his gravity hammer, just make sure you don't have any equipment, because he will drop a flare, and you can maybe accidentally pick it up instead of the hammer.

The 2 Hammer launches: After dropping down the shaft you want to crouch on the edge of the grate on the ground not facing wall and after the cortana moment is over you want to drop a nade so it lands against the wall so it's set up for a launch. You can do a hammer launch on your jump up, but there's a way smaller chance to die by hitting a wall by just doing it on your way down.

When you get to the area with the big chasm, you want hit the door so that the pelican will load on the landing pad. After hitting the door you want to a hammer launch off the grate on the wall so you skip the entire brute section. Then you go hit the elevator button, and then jump on top of the light on the wall and then into the elevator, so you don't have to wait for the door to open(the elevator won't crush you).

Landing pad fight: For the landing pad fight you want to kill 2 brutes and then jump on top of the pelican so you can get up to the top where 5 brutes will spawn. After you kill 5 brutes the door on the right side of the area will open with 4 additional brutes for you to kill. When all the brutes are dead you want to drop down to the fusion coil that is close to the door and set it up for a launch off of it. An easy way to set it up is to throw a spike grenade on the wall behind it.

There is not much to say here for legendary. Simply optimize movement and make sure to pick up a BR at the bottom of the staircase when exiting the first room.

Going fast in the first hallway fight hinges on good grenade throws and prioritizing the brute near the doorway to the next area. If he goes down quickly the surrounding grunts will panic and flee. You can use the slot in the barricade behind the first large shipping container to overcharge the brute.

Once you clear this wave, it helps to grab a DC and BR ammo from either underneath the hangar floor, or from the upper lookout building at the front of the hangar. You can grab BR ammo through the wall by simply jumping up on the UNSC box and then jumping up alongside the metal wall of the lookout building.

As you enter the drone room, a marine will shout at you and then get picked up by a swarm of drones. Bounce a frag grenade off the ground near your feet to kill the drones. If you kill less than 5 drones an additional wave of drones will spawn at the pipe on the far side of the room. Run to the Turret and place the DC from the hangar in front of the turret, you will be able to shoot out through the DC but the drones will not be able to shoot through you. Grab a plasma pistol from the fallen drones.

Make sure you wait for a checkpoint before opening the door in the bomb room, then melee to delay a further checkpoint just incase the cheiftan has a flare. The hallway between the boom room door and the Motor-Pool door is the load at which the equiptment the cheif is carrying is decided in. Use the plasma pistol to overcharge the chieftain and then quickly switch to your BR and headshot the chief four times. He will drop either an invincibility or a flare. If he drops a flare it is unlikely you will survive the room. If he drops an invincibility you can grab it and his gravity hammer then immediately activate the invincibility to survive the wrath of the 14 or so brutes that will then bear down upon you.

When you drop down the hole, you can perform the Grate Launch by walking to the left side of the grate during the cortana moment and tossing a frag at your feet just off to the side of the grate. If done correctly you will flip the grate up against the right hand wall of the tunnel and you can then hammer launch off the grate all the way down the tunnel. When you meet up with arbiter you must press the button to open the door to the barracks before hammer launching off the grate on the wall to launch across the chasm and skip the entire barracks section of the level.

To the Bomb Room

After the cortana moment, perform a hammer launch off the weapon crate just after you open the door. Once you round the corner activate camo and simply walk right past all the enemies. There are a lot of enemies and two snipers on an upper landing at the end of the hallway. It is possible to do this section without camo, but it is difficult. If the enemies are actively aggressive in the previous area by the time you enter the bomb room, the enemies may be alerted earlier than if the enemies in the previous area were unaware of your presence.

The bomb room fight is the hardest section of the level. It is entirely possible to get to this section on record pace and just lose the run due to a poor hammer launch or particularly aggressive AI if you are going for world record. If you want a more consistent method of getting though this section, turn right as soon as you get in the door and jump onto the weapon crate, then onto the wall, then up onto the pipe in the ceiling. Walk along the pipe towards the bomb making sure that the pipe obscures the line-of-sight between you and the brute on the turret at the far end of the room. When you are at the bomb drop down and quickly activate it, then throw a grenade at the brute on the turret to make him get off, then walk backwards until you reach the top of the first set of stairs and perform a backwards hammer-assisted crouch jump and you will have just enough height to make it over the railing and hopefully escape.

As you exit the bomb room and enter drone room, go left around the pillar in the drone room to avoid getting shot by the jackals on the right side of the room. Make sure to fire off some BR ammo after the cortana moment in order to prepare for the drone butterfly. Pause for a half second in the doorway before the drone fly so that you don't aggro the grunts too early, then jump up and drone ride down the hallway. Do the last hammer launch off the crate, and run into the elevator and press the button. Then wait for the level to end.