Assault on the Control Room 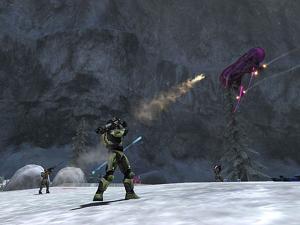 "Defend the Control Room against wave after wave of Covenant troops."
Information

The Silent Cartographer - Assault on the Control Room - 343 Guilty Spark

Here is Garish's tutorial on Banshee Grab. This trick can be only done on Legendary (and Heroic). When exiting the door onto the bridge, line yourself up at the right side, while looking down to see a dark line on the floor which your reticle should be to the center of. Once you've lined up, shoot the grunts on both the left and the right sides of you if they are there and throw a grenade at the shade turret to the left of you to prevent grunts from getting in it. Then look at the banshee. Just before its wing crosses the edge of the canyon, crouch for a half second or so, then wait for the banshee to hit the wall. Then walk to the side of the door closest to the banshee, wait a split second, then walk to the other side of the door. If done correctly, the elite should fall out of the banshee and you should be able to get in it early.

The positioning and movement for each drop is quite precise and is best presented in this video tutorial
It is possible to drop from the first bridge in the level to the canyon floor below, which breaks enemy spawn triggers for the rest of the level. Going through the rest of the level is trivial. The trick has 3 parts, 2 of which have alternate easy and difficult methods.

After you've successfully completed Bridge Fall, not only does it skip all enemy spawns, it also prevents a door later in the level from unlocking if you were to proceed normally. This is the reason you must grab the first banshee that sits aback the dead end canyon. Standing at the back of the canyon next to the banshee, look back toward where you came and look up. There are two bridges. The left end of the nearest bridge is the door you must fly to/enter to proceed.

Here is cordiaxiz's video on Banshee Teleports. There are two banshee teleports which you can do to skip past walking and waiting at certain sections of the level.

For the first teleport, get your banshee inside the room by opening the doors by exiting and entering the banshee, then carefully maneuvering it through the hallways. Then once you get inside, line up with the line on the ground such that your reticle is completely parallel to the ground. This can be tricky and there are multiple different setups used by different members of the community. Once you line it up, hold space as you get out of the banshee, then melee the top of the banshee at the top right corner, walk around to the right wing side of the banshee and melee the dot at the corner near the right and center of the banshee while holding forwards. Then once you can't move forwards anymore look at the dot on the left side of the banshee and hold right. You should be teleported to the door that leads to the snow bridge.

For the second teleport, line up the bottom left part of the reticle with the middle rectangle on the ground. Then do the same sequence as the first teleport, except the second melee should be on the second right square on the banshee. This will teleport you to the room with the last button used to end the level.

There is one place later in the level where a grenade jump can save 5 or more seconds. In the first room after exiting the first banshee, as you enter the inner part of the room, you can do a single grenade jump up to the platform on your left. An example video can be seen here.